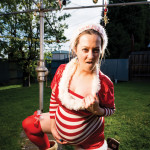 It’s one of those hot Christmas Days when the house is just too full, sweaty and noisy. The women get the meat cooked and the salads made. The women make sure there are knives, forks and crackers on the table. The women have decorated the tree, and organised the Kris Kringle, and bought everyone’s Christmas presents, and now they just need five minutes away from every single other person in this bloody family or they are seriously going to lose their shit. SNAFU Theatre’s latest production delivers us right into the middle of a suburban Aussie Christmas, where the women are funny, compassionate, and downright angry. It’s a Christmas of food, Facebook, football and feminism… oh, and the dead body buried in the backyard that no one wants to talk about. Merry Christmas, Bitches! follows six different women, each played by writer Samantha Hill. Hill has written a hilarious tapestry of Australian voices, drawing on her own experiences of growing up in regional Australia, and her memories of the yearly trip back to Broken Hill for an enormous family Christmas. Underneath the humour lies a darkness that inhabits many Australian families. With organisations like Destroy the Joint tallying the number of women murdered in Australia, it’s clear that the conversation about violence against women needs to get louder. And it’s women’s voices and their varied stories that need to be heard. Now in its thirteenth year, SNAFU Theatre is still evolving. Sam Wilson, artistic director, is excited to direct Hill again: “This is the seventh show I’ve directed Hill in – we call each other Hill and Wilson to avoid confusion – and she’s always a pleasure to work with. And I love mixing it up a bit – it’s great that Hill’s returned to writing, and that she’s come up with a great script that explores stuff that SNAFU loves getting its teeth into, but from a whole new perspective.” SNAFU Theatre was formed in 2002 by Sam Wilson and May Jasper, and sparked a number of successful writing partnerships. As a predominantly female-run theatre company, SNAFU is passionate about creating challenging shows that examine gender and our very human failings.