May Jasper of SNAFU Theatre has launched her
very first podcast! Listen to it! 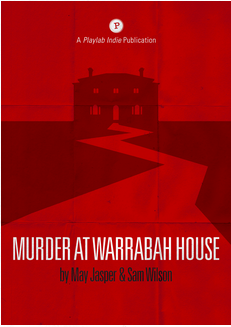 Murder at Warrabah House OUT NOW through Playlab!

May Jasper and Sam Wilson wrote a play in the style of an Agatha Christie novel called Murder at Warrabah House, and now it has been published by Playlab! If this works out for them like it did for Agatha, the pair will sell millions of copies, become famous crime writers, disappear for 11 days, turn up with amnesia in a spa hotel in Harrogate, and then marry an archaeologist. Awesome!

In other words, do buy!

What people have said about SNAFU Theatre:

“A welcome example of what happens when the performer and crew get it right.” – Arts Hub

Ten Months in a Cold Town